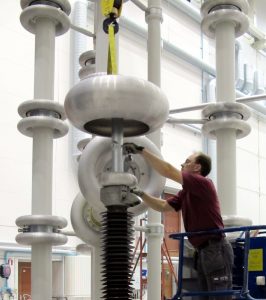 STRI’s laboratory, located in Ludvika, Sweden, is designed and equipped for high voltage tests in accordance with the latest international standards.

We perform independent high voltage tests on power products with system voltages up to 800 kV. All dielectric tests can be carried out.

The laboratory has unique facilities for environmental and pollution testing.

STRI’s laboratory is accredited by SWEDAC, the Swedish accreditation body, giving our clients the benefit of knowing that we provide quality testing and competence. STRI is a member of SATS, the Scandinavian Association for Testing of Electric Power Equipment which is a member of the Short Circuit Testing Liaison (STL).

STRI has participated in the development and type testing of 800 kV UHVDC being built in China and India. STRI has tested all major components included switchgear, converters, bushings, station post insulators and transmission line insulators and conducted an outdoor complete system test.

STRI’s climate test hall has one of the highest performances in the world enabling pollution testing of 800 kV HVAC and HVDC equipment.

STRI’s 800 kV HVDC installation was the first of its kind in the world.

Our test resources are backed up by advanced equipment for controlling and measuring test data. 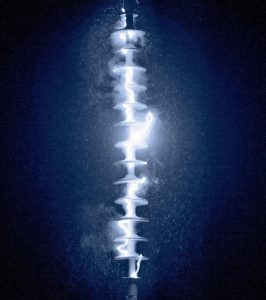 Besides four modern and flexible high voltage test halls there is also a circular climate test hall equipped with steam fog generators and salt fog ramps. The temperature of the hall can be controlled between -10°C and +55°C. AC and DC voltage are available up to 900 kV and 1200 kV respectively..

We also have smaller climate, environment, and ageing test chambers that can be used for long term testing and facilities for material and mechanical testing.

Click here to read the latest news from STRI